How Does Your Garden Grow, part 2

Two, three, four, tell us what the garden bore...

It was an itsy-bitsy, teeny-weeny, yellow-flowered green zucchini that I saw for the first time today! (Well, yesterday, actually.) First one of the season, and there are more blossoms where that came from.

The string beans are also flowering, and I can detect the first tiny beans forming. There are also tiny, incipient fruits on one of the Sun Gold tomato vines. There was one tiny pepper on the Yellow Cheese plant, but it has unfortunately split open while it was still fingernail-sized. Not sure what caused that--all the rain we've been having, perhaps?

The snow peas are still producing, which throws out all my calculations, since my plan was to plant the winter squash in the same spot after I'd finished harvesting the peas. But since it means more snow peas, I can't really complain. We've already had two meals' worth, plus the ones that got eaten raw right off the vine. 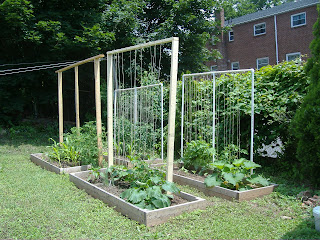 We finally got the trellis on our fourth bed put up yesterday, so I was able to string up the pumpkin vine that had been intruding on my onions. The corn is also growing rapidly--well past my knees already--so I have hopes of having fresh sweet corn to feed to the in-laws when they come to visit in a month.

The one crop that's nearing its end is the lettuce. It's interesting how I can now clearly distinguish the heads that I actually planted this year from the ones that reseeded themselves from last year. Last year I planted a generic Bibb variety from the rack at the drugstore, and those plants are now starting to bolt. But this year's plants are a bolt-resistant variety called Tom Thumb, and they still look like proper round heads of lettuce. So we should get a few more salads out of this garden before the dog days arrive.
Posted by Amy Livingston at 12:14 PM No comments:

On my recent trip to Pittsburgh, I read an article in Acela, the Amtrak on-board magazine, called "The Race for Third Place." (It appears to have been picked up from the airline magazine Arrive, because I found a copy of it here.) It was about how the recession is posing a special challenge for businesses that have been trying to market themselves as "third places"--that is, places where people spend significant amounts of time other than home and work. A "third place" could be a bar, a library, a coffee shop, a health club, a church, or a shopping mall--anyplace where people go just to "hang out," rather than going in, conducting their business, and leaving.

The existence of places like this is one of the things that holds communities together. That's why I like living in a town that has both bars and churches, even though I never spend any time at either type of place. It's why I mourned the passing of the local sweetshop, with its bona fide old-fashioned soda fountain, even though I only actually went there a few times a year. And it's why I was disappointed when the "comic cafe" across the river, once a great hangout where you could enjoy an ice cream or browse through comics or both (just so long as you didn't actually handle food and comics at the same time), moved to a new venue, where the comic shop was upstairs and the cafe downstairs, with no seating at all in the comic area (presumably because they didn't want to encourage folks to sit down and look at the merchandise) and so little in the cafe that you would feel guilty about lingering for even a minute after finishing your food. (I lost all interest in going there after that, and the Troll switched to buying his comics from another store, one that sold games as well as comics and actually encouraged hanging out.)

But it occurred to me as I read the article that, although I recognize the importance of places like these, I don't really have a "third place" myself. Sure, I like to go to a coffeehouse once in a while, but I'm not a regular at any particular coffeehouse. I take ample advantage of our local library, but I don't really hang out there--I mostly just go in, browse through the books and videos, choose one or don't choose one, and leave. I don't sit down with the book I've found and read it right there. In fact, because I work at home, I really don't even have a second place, let alone a third one.

So why, if I understand the value of having a place to hang out, don't I have one? I think it's because for me a "third place" would have to be someplace I could spend significant amounts of time without spending significant amounts of money. That lets out the coffeehouses, because $3 or $4 a drink starts running into money when you make a daily habit of it. And it lets out the library, because you can't eat or drink at all in there, and I like to have something to sip while I read. So the closest thing I have to a "third place" is the local park, where I like to go for walks in the summer, and where I can sometimes perch on a park bench and work on a crossword and drink my own coffee that I made at home, without having to pay $4 for it. But the thing is, when I go and hang out at the park, I'm hanging out by myself. I might see a few joggers passing through, or a mom with her kids, but I don't usually interact with anybody. It isn't really a place where I could go to meet people, or even just to be around people.

I wonder why in a town like mine, which does such a good job in so many ways of maintaining strong community ties, there are no real public spaces for people to connect with their neighbors?
Posted by Amy Livingston at 5:48 PM No comments:

Something makes me think I'm not doing these correctly.

Just a hunch, that's all.
Posted by The Troll at 2:06 PM No comments:
Labels: sketches 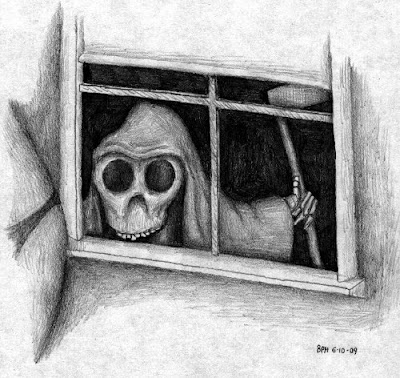 Posted by The Troll at 9:40 AM No comments:
Labels: drawings

In my experience, there are two general reactions to things that we don't understand:  fear or fascination.  From this stems my fascination with words.
And my fear of plastic furniture.  But this is beside the point.
Imagine an adjective like "small."  To make the comparative form, we add "-er" to make the word "smaller."  To make the superlative form, we add "-est" to get "smallest."
Now it is perhaps reasonable to argue that I have chosen a bad example, in that "smaller" is longer than "small" and "smallest" is longest of all, but you get the general idea.
My question is:  how many sets of three words are there where the trio takes the form of a base adjective, its comparative form, and its superlative form without being any of those things?  We've come up with two sets so far:
temp
temper
tempest
dive
diver
divest
I was wondering if anyone could come up with any more of these.  Or at least make fun of me for devoting so much of my dwindling mental energies to questions such as these.
Posted by The Troll at 9:54 AM 4 comments:
Labels: wurdz

I'm a big fan of the show "Stargate Atlantis," and especially of the character Rodney McKay, the über-brilliant, über-obnoxious scientist who always comes through for his team when the chips are down. So one day, out of idle curiosity, I punched a query into Google about McKay's romantic history. I knew the character had a big following, so I thought this was the sort of information that might be out there somewhere in the tangle of the Web.

Well, maybe it was the wording of my query, but I didn't find what I was looking for. What I found instead was something I could hardly believe existed: a Rodney McKay/Sam Seaborn crossover slash fanfic. I mean, what?!?

Sam Seaborn, of course, is the bright, idealistic, and extremely good-looking deputy communications director in the Bartlet administration during the first three seasons of "The West Wing," played with éclat by Rob Lowe. Who is, indisputably, pretty hot. And David Hewlett, who plays McKay, isn't so bad either. But there is nothing--I mean, nothing--about these two characters that would make me want to see them together. There's nothing about the way either of them is portrayed to suggest they'd have any chemistry together on any level--nor, for that matter, to suggest that either one of them swings that way, even slightly.

Out of a sort of perverse curiosity, I read a bit of it to see how it was. Bizarre, is how it was. The setup is basically that Rodney is sent to Washington to ask the Bartlet administration for more money for the Atlantis mission, and when Sam rejects his request, Rodney decides to offer him--an additional incentive. This just does not work on so many levels. For starters, only an idiot would send Rodney on any kind of diplomatic mission. And it's not remotely plausible that Sam would have the authority to approve funding--he's not even involved with budget decisions, and he probably doesn't have high enough security clearance to even know about the Stargate program. (In the second-season episode "Somebody's Going to Emergency, Somebody's Going to Jail," Sam reveals that he doesn't have code-word clearance, which he would need to view an NSA file.) The idea that Rodney would think to use sex as a bribe is not at all consistent with his character, and the idea that Sam would accept a bribe of any kind is even less consistent with his. But it was really the idea of those two characters together that was just...too...weird.

The whole experience was so odd and vaguely disturbing that I can't even bring myself to post a link to the story. But I have to admit, the nature of my objections to it goes a long way to show just how big a fangirl nerd I am.
Posted by Amy Livingston at 9:32 AM No comments:
Newer Posts Older Posts Home
Subscribe to: Posts (Atom)