At Thanksgiving dinner, my family doesn't "say grace" as such. Instead, we go around the table and each person there tells what he or she is thankful for at that particular point in time. Here's a list I've been working on:

I'm thankful that we took over a year shopping for a house because we absolutely insisted on staying within our price range, rather than taking advantage of low interest rates to buy a bigger house with a fancy adjustable-rate mortgage. I'm thankful that our house isn't among the 1 in 410 in our state that's currently in foreclosure.

I'm thankful that last year we kept so much money in our boring old bank account, earning a trivial rate of interest, instead of putting it all in the stock market to maximize our return.

I'm thankful that my being without work for the past couple of months hasn't really hurt us financially, because we live frugally enough to get by easily on one income. I'm thankful that we're not among the millions of people scrambling for minimum-wage jobs at federal employment centers. I'm thankful that this year we are still giving money to our local food pantry rather than relying on its services.

I'm thankful that I don't live in the Congo or the West Bank. I'm thankful that, if my country is involved in a war, it's all happening far away from me and my family--and I'm thankful that we will soon have a president who is prepared to set a date for ending the war altogether and bringing the troops home.

I'm thankful that my sister has found both a good man and a good house to share with him--and that she was able to sell her condo, even in a down market.

I'm thankful to have a wonderful, supportive (if goofy) husband, and a warm, fuzzy little cat to keep me company around the house (even if she does loudly request that we get up and feed her earlier than we might consider reasonable).

I'm thankful that we were able to get our attic insulated before the really cold weather hit.

I'm thankful that gas prices have come down (just in time for our annual cross-country drive next month to visit the Troll family). I'm also thankful that, despite the lower prices, Americans are continuing to drive less and pump less carbon dioxide into the atmosphere.

And I'll be very thankful to spend just one day focusing on all the things I have to be thankful for, rather than on the things that bug me.
Posted by Amy Livingston at 11:33 AM No comments:

Last year, my father-in-law gave us a bunch of old glass-top canning jars found at a yard sale.  Since we don't have a canner, we decided to use them to store a variety of dry beans and seeds we had in our pantry.  They're now lined up in a colorful row on the shelf next to our basement stairs--white beans, red lentils, chick peas, kidney beans, brown lentils, black beans, sunflower seeds.  Every time I pass by that row of jars on the way up or down the stairs, the word that pops into my head is "wealth."
The jars themselves, with their contents, probably aren't worth more than 30 dollars.  But when I look at them, I don't just see the beans themselves: I see curried red lentil soup, chick peas in broth with crisp bread crumbs, pasta fagioli, chili, white bean stew with dumplings.  I see a dozen hearty, savory meals, right there at our fingertips.  I see the means to make it through a week-long blizzard, if we ever have to, safe and well-fed.  Those are not just seven jars of beans; those are seven jars of security.
Sometimes I think Jack in the fairy tale was perfectly sensible to trade away his old cow for a handful of beans.  What could be a better investment than that?
Posted by Amy Livingston at 3:57 PM No comments:

In my regular perambulations about the Web, I often dwell on various sites devoted to upcoming movies.  I'm watching fewer movies these days (especially in theaters - waaay too expensive) than I have at any other time in my life (barring infancy, I suppose), but I just can't seem to stay away from reviews and trailers and all the other goodies that the movie studios put out in an attempt to distract us from our Internet long enough that we might wander into a theater and give them money.

Today, I ran across a poster for a movie called "The Tale of Desperaux."  I'd seen the trailer a little while back when we made our annual trip to the local cinema (to see "Wall-E") and had liked it pretty well - the movie looked cute and it had been the only trailer they'd shown that hadn't made me want to crawl under my seat and retch.  But I did a double-take when I saw the poster.  Here's why: 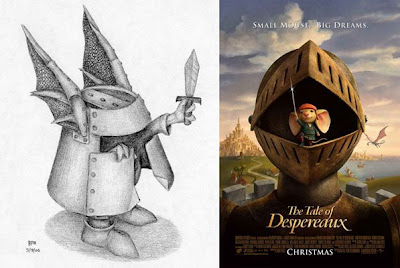 On the left is a picture I drew in March of 2000.  You can find it here along with comments left by various viewers going back over eight years.  On the right is the aforementioned movie poster.  Interesting, eh?

And here's another one that I discovered a few years ago: 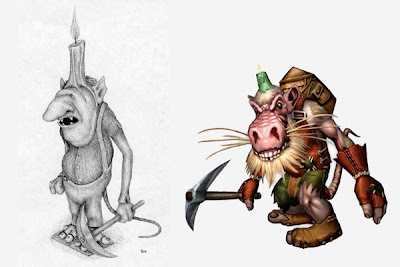 On the left is a sketch I made of a kobold, drawn in either early 2000 or late 1999.  It's been posted online here since early 2000 also (along with this companion piece, which is actually explicitly identified as a kobold in its description).  On the right is a picture of a kobold from the game World of Warcraft, which was announced in late 2001 and was not released until late 2004 (which was when I first saw it).

Ever get that feeling someone's been rummaging around in your brain?

No one has, of course.  These are coincidences, the results of a few people (out of the over six billion on this planet) having similar ideas and writing them down.  With both of these drawings, the "creative process" I used was fairly straightforward.  If you want to draw a picture of a tiny warrior, you give him a little sword to show that he's a warrior and a great big helmet to show that he's tiny (and to give the whole thing a humorous tinge).  If you want to draw a picture of a kobold as a sort of a faerie/goblin miner (as kobolds are in some German folklore), you give him a mining pick and a candle (it's dark underground).  If you want to make it a little more interesting, you sit the lit candle on top of his head so he has both his hands free to mine.

In both cases, even if the odds are a billion-to-one of someone else having the same idea and drawing a picture of it, the odds are pretty good that at least a couple folks have done it.

But it's still pretty eerie when it happens.

Posted by The Troll at 3:05 PM No comments:
Labels: drawings

Vote and Get Coffee

I've voted! Have you?

If you have, you can get yourself a free brewed coffee at Starbucks. Seriously! All you have to do is go in, say you've voted, and get a 12-ounce cup o' joe. It's right here on their website: http://www.starbucks.com/sharedplanet/news.aspx

Oh, and you get to participate in our democracy, too.
Posted by Amy Livingston at 10:27 AM 2 comments:

I never realized how much of my time I was frittering away on the Internet until my cable got taken out by high winds this past Tuesday. All of a sudden I found I was getting around to all those little projects I'd been putting off for weeks because I could never quite find the time for them.

Unfortunately, that advantage didn't really outweigh the disadvantage of being unable to run to the computer and take care of all those little things that pop up a dozen times over the course of a day. E-mails piled up in my inbox, and I could only attend to the urgent ones in half-hour blocks on the public computers at the library. Worse than that, in the final week before the election, I was cut off from realclearpolitics.com, my source of the up-to-the minute polling data that I required in order to obsess over minute day-to-day changes in the electoral map. And, in what may be the highest irony of all, I had to pay my cable bill by mail, rather than using my online bill payment service, because I was afraid that I wouldn't get it paid on time if I had to wait for the company to get the cable fixed.

So I am forced at last to acknowledge that, without reliable Internet access, my life is not complete. For better or worse, I am now a cyborg.
Posted by Amy Livingston at 10:50 PM No comments:
Labels: technology
Newer Posts Older Posts Home
Subscribe to: Posts (Atom)